After wolfing my Tillamook Country Smoker beef sticks and wishing I had about three more, I zipped back into Beacon Rock State Park to hike up to Rodney Falls. To get to the trailhead, you turn north off of Hwy 14 right across from the Beacon Rock parking area. This road will end up at a campground, but shortly before you'll see the marked parking area for the Hamilton Mountain trailhead. I will, in due time, hike to Hamilton Mountain. But, being a 7.6 mile hike with a 2,000 foot elevation gain, I decided to save it for another day in the coming Spring. Instead, I hiked 1.1 miles from the trailhead to Rodney Falls and the Pool of Winds (which I will describe below).

The hike was, as I expected, very muddy. 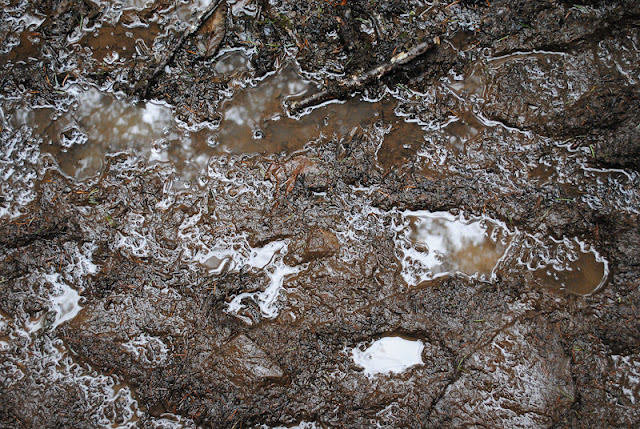 From the trailhead to Rodney Falls you experience a mixture of thick forest and open space underneath, of all things, powerlines.

Like most waterfalls, you can hear it before you can see it. Same goes for Rodney Falls. Upon approaching the falls you will see a sign leading you up a very short side trail to something called "Pool of Winds." Go see it! In about 100 paces you'll be perilously leaning over a guard rail and peering into this grotto-like rock bowl, into which the top half of the falls pours into and out of which the lower half of the falls gushes loudly and violently out of.

Needless to say, you'll get wet up here with the spray, so if you have a nice camera on you like I did, I wouldn't suggest sticking it into the grotto to take a photo. It'll get wet fast. The Pool of Winds itself is pretty awe-some, if not very intimidating. There is something thrilling and scary about sticking your head out over the railing and looking into the thunderous and tumultuous churn that goes on within.

Not only is Pool of Winds worth the climb up to, but the view of the falls and the wooden bridge below is fantastic. 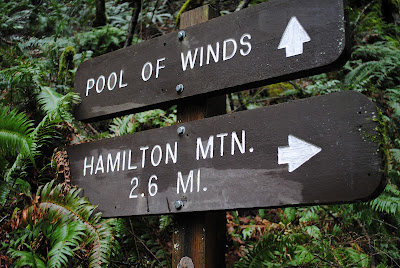 Also, make a point to come down to the bridge itself. Bridges like these, that I've only ever seen deep in the Pacific Northwestern woods, are so beautiful to me. I wish, like a troll of sorts, I could just loiter at one for hours, either reading, thinking, conversing with passers by, experimenting with photography, or all of the above. If you cross this bridge and continue onward, the hike suddenly becomes very steep as you trek on to Hamilton Mountain. If all you want to see is Rodney Falls, here is your chance to stop, take in the moment, and then turn around.


After taking in the beautiful sounds and sprays of Rodney Falls for a bit, I started back for the car. I had seen on my trail map of Beacon Rock S.P. a short hike to something called Little Beacon Rock. Curious to compare the two, I had to check it out.

Little Beacon Rock was one of my favorite spots of the whole day. Not only did it give you an outstanding view of Beacon Rock itself, but the area is itself gorgeous. Little Beacon Rock was a great place to sit for a moment and reflect on how great the day had been. The area is open and very rocky. The trail snakes around mossy boulder fields and a rocky slope. Little Beacon Rock is just a large rock (that sort of resembles a petrified stegosaurus) that juts up atop hill composed of smaller rocks, and although it lacks the grandeur of its big brother, it is a beautiful slice of the Pacific Northwest. The whole time I was at Little Beacon Rock I did not encounter a single other person. It was as if I was the only hiker that day that knew it existed.


Thus concludes the weekend's trip to Beacon Rock State Park, however I wanted to end with just one more photo, that of Hamilton Mountain taken from the trail. In the near future I will be returning to the park to hike to the summit of Hamilton Mountain. Take this photo as a sneak peak and just an example of what is to come in the Spring months, which thankfully lie within the light at the end of winter's tunnel.

Posted by The Black Watch Sasquatch at 5:38 PM