Ever since learning about this hike I have been dying to do it. Winters in the Columbia Gorge, however, can be unruly, especially due to the wind. But I am happy to say that this weekend the gorge was perfect, making me doubly happy (one, it was a beautiful weekend; two, Spring is at last arriving!). Now, there are numerous trails in the gorge, both on the Oregon and Washington side, that I am eager to get under my belt this year and present to you in this blog, but first thing's first: Beacon Rock.

What is Beacon Rock? Think of it as a gigantic, 850 ft tall, Faberge Egg made of volcanic rock that sits alongside the Columbia River in the state of Washington. And where did Beacon Rock get its name? From Lewis and Clark on Halloween, 1805! That's right, Meriwether Lewis and William Clark named this rock; and it is from this location that they noticed tidal influences on the Columbia River, therefore coming to realize that the ocean was not much farther.

From the ground, you peer up at this vertical monstrosity and wonder how on earth there is a hiking trail that leads to the top of it. It looks like more of a feat for climbers than hikers (and, indeed, climbers can have their fun here too). But thanks to the dedication, persistence, and brilliant vision of one man, Beacon Rock is what it is today rather than a pile of ruble at the mouth of the Columbia.Wait, what?

This rock has a pretty interesting history. Yes, Beacon Rock was in danger of being blown to bits by the Army Corps of Engineers in the early 1900s. These bits would then become a jetty where the Columbia meets the Pacific Ocean. BUT! A man named Henry Biddle, who first unsuccessfully begged and pleaded Washington State to turn the area into a state park, bought the rock in 1915 before the Army Corps of Engineers could get their grubby, destructive hands on it.

For the next three years, with blood, sweat, tears, and dynamite, Henry Biddle carved a hiking trail up the side of the steep rock. This trail consists of switchbacks, railings, concrete slabs, and bridges. Interestingly enough also, due to the almost vertical nature to the terrain Biddle could not scout the trail to plan it's course before starting to build it. Rather, he would just build one segment, try to finagle a way to build the next using imagination and know-how, and so on. It is, to say the very least, one of the most unique hiking trails you'll experience in America. It is also, to say a lot more, breathtakingly beautiful; and grows even more so with each step you take.

This is what Beacon Rock looks like from a distance (looking south, with the Oregon side of the Gorge in the background).

The view below is just one example of the views you get of the Columbia River throughout the entire hike.


Enough about the rock itself. Now it is time to talk about the hike.

When you first get out of your car and stare up at the monolith in front of you a feeling of "oh shit" enters your mind. You start to fixate on how many calories you're about to burn or how jelly-like your legs are going to be by the end of the hike. But then, suddenly, you notice the elderly couple, hardly even out of breath, coming down the last leg of the hike towards the parking area without a single bead of sweat on their foreheads nor wobble in their legs. Really?, you might think to yourself.

But truth is, regardless of how much elevation you gain in such a short distance, this is an easy hike. True, you are in a constant state of ascension until you reach the top, but with 50 or more switchbacks, the ascension is gradual... very gradual. This is both a great thing or a disappointing thing, depending on who you are. It is a great thing to people who aren't able to tackle strenuous hikes, such as families with small children or the elderly. But it is disappointing to people who arrive expecting more work to achieve the views from the summit. Luckily for those of you who fall into the latter, challenge-seeker category, however, there is Hamilton Mountain, the trailhead to which is located about 1 minute's drive from the Beacon Rock trailhead.

NOTE: You will need a Washington State Park Discover Pass to access this park and other parks. You can either pay $10 for a day-use pass or $30 for an annual pass. Unless you know for certain that this is the one and only state park in Washington you plan on visiting for the next 365 days, I would recommend buying the annual pass. 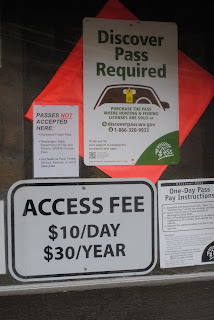 After leaving the parking area you will spend a few brief moments walking through a boulder-y forest until suddenly you get a wide open view of the Columbia and see a large metal gate ahead of you. This is where the trail truly begins; and it only gets better and better from here. After passing through the gate, you will quickly get glimpses of what lies ahead: switchbacks, bridges, and killer views.

Even if you are terrified of heights, this hike will only moderately freak you out. First off, you have very strong, tall guard rails that line the entire path. Second, Beacon Rock, although steep and relatively vertical in nature, is to some extent "stair-like" in that if the highly unlikely event of your falling were to occur, you would only "fall down a step or two" rather than fall all the way to the bottom. Gnarly as that may sound, it at least lends your average person a sense of some sort of comfort that if they were to fall, on most parts of the hike, they wouldn't fall far. But, let's face it, even about a 20 foot fall on this rocky trail would result in a trip to the hospital. This hike is a lot more dangerous than a mere walk in the woods if you don't tread lightly or stick to the trail.

Here are some photos from about the first two-thirds of the trail.

When you're about one-third of the way to the top, you will get your first view of the gorge looking east over Bonneville Dam. Here (below) is the view you should expect.

When you feel as though you have entered a forest way up on the rock, you've entered the final leg of the trail. Soon, you will have reached the top. The trail will feel much different from here on, as you are indeed hiking through a little forest on top of this massive volcanic egg. I encountered the last hour or so of a morning fog that had almost completely risen from the river valley floor when I reached this altitude. The fog lent a mysteriousness and spookiness to the hike which boosted my enjoyment even more.

Here are photos from the last (and highest) leg of the Beacon Rock trail, including its 850 foot summit.

In the summer months, the summit is going to get crowded early on in the day and stay crowded until the sun has nearly set. In the winter, however, I was the only person up here for a good twenty minutes. Nothing beats taking in views like this in silence.

Beacon Rock's trail is one of the few trails where, even though you follow back the same way you came, the trail feels very different. Much of that is due to the fact that you are so captivated with what lies ahead of you while hiking, that you rarely stop and look behind you. Now, on your way down, you will see the trail from a totally different perspective. I stopped and took several photographs on my way back down because I saw so many beautiful sights that I neglected to notice on my way up Beacon Rock.

Here are some of the wonderful sights you'll see on the way back down Beacon Rock.


Upon reaching the ground and hungry for food and more hiking, I decided to swing over to the Skamania Hwy convenience store quick for some Tillamook Country Smoker beef sticks and some V8 before I hike the Hamilton Mountain trail to Rodney Falls and Little Beacon Rock.


1) If you come out to Beacon Rock State Park I highly suggest you stop at the Skamania convenience store, located just west of the park at the intersection of Hwy 14 and Woodard Creek Rd. Walking into this store is like stepping into a movie set from The Great Outdoors. All I could think about while in the store was that bait shop from the movie Grumpy Old Men. It is like stepping into the past. You know you are not in Portland, let's just say that. I love old convenience stores like this. It reminds me that I'm in the woods.


2) If you stop at any convenience store out there in the wilderness, look for Tillamook Country Smoker beef sticks or beef jerky. It is the best beef jerky I've ever had in my life. It tastes so fresh and has far greater quality that other beef jerky I've tried. Beef Jerky is a fantastic trail food (well, unless you're in bear country...) that gives you protein and calories and is easy to carry. And I highly recommend Tillamook Country Smoker products! Matter of fact, from their website you can order large tubs of their beef sticks and jerky. I plan on placing an order by the end of the month.

I exited the convenience store right in time to watch a freight roar past along the rails right across the street. I regret, however, not turning around and taking a photo of the Skamania Convenience Store itself. But it's only a matter of time before I add a photo of it to this blog entry and, of course, erase the very sentence you are now reading. 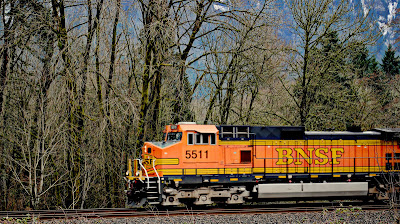 Posted by The Black Watch Sasquatch at 4:38 PM