What started off as a passionate intention to tackle the wild eight-mile hike alongside the roaring, churning, and rampant Clackamas River ended up being a submissively easy, quiet waltz around a beautiful and harmless nature park.

I have to admit, I am chomping at the bit to get back on a serious trail. In the shadow of serious rains and a cold-front, I have been limited to easier hikes that do not pose any danger.

Not to sound like a total Sally, but some of these more intense hikes go deep into wilderness, and being that I take these hikes alone (since my wife works on Saturdays), and especially being the winter, I am trying to do the smart thing by not attempting hikes that could result in injury, dehydration, or unforeseen obstacles or dangers while alone in the dead of winter. Things like a downed tree over a roadway unkempt during winter months (blocking your car from being able to exit a scarcely-traveled forest service road), a sprained ankle or broken leg, or a flash flood could be fatal out in these wild territories surrounding Portland. And on top of it all, one of the biggest detractors from going deep into the woods during the winter months is the very little daylight that you get during this dark and cloudy season. The last thing you would want to do as a winter hiker is get stuck deep into the woods, far from your car and from civilization, when the sun goes down and you have to feel your way back while the temperature gets lower and lower. Also keep in mind that cell phones do not get reception in the vast majority of the wilderness.

There is a big difference between being brave and being stupid. And though I am growing more and more impatient to get back out into the true wilderness to get moderate-to-difficult hikes under my belt and into this blog, it's always better to be safe than sorry. In the average wilderness surrounding Portland, we are not talking little state parks like the ones I used to hike growing up in Illinois. Mt. Hood National Forest is 1,067,000 acres in size, and that is just one of wildernesses surrounding the city, the one directly to the east. It can be dangerous out there in the wild any time of year, but especially so during the winter, when spraining an ankle 5 miles from your car at the trail head is the least of your worries.

So, needless to say, this week I am reporting yet another very easy hike through what is basically a nature park on the outskirts of a small town on the Clackamas River, Eagle Fern Park. This isn't a hike as much as it is a beautiful walk around a park full of towering old cedars and firs. There were fishermen looking for spawning salmon in the creek, there were families walking around and stopping at each of the information boards, which are, by the way, very educational. There are a few side-trails that break from the main wide loop trail, but you can tell that the park does not technically endorse their use due to fallen debris that hasn't been removed, no signage, etc. It is on these trails that many of the photos below were taken. After a rain, I wouldn't recommend taking them. At one point, while skidding down a steep, wet, muddy section of one of the trails on my rear end, it dawned on me that these side trails get rather muddy.

Eagle Fern Park is a gorgeous place, but do not come here expecting a work out or hardly more than a nature loop through the woods. The park has several picnic areas, a playground, restrooms, several spots to cast your line in, grills for barbecues, and lots of information displays educating the public on flora, fauna, spawning, etc. It is, first and foremost, an excellent place to take children, to have a picnic, or to learn about forests of the Northwest. 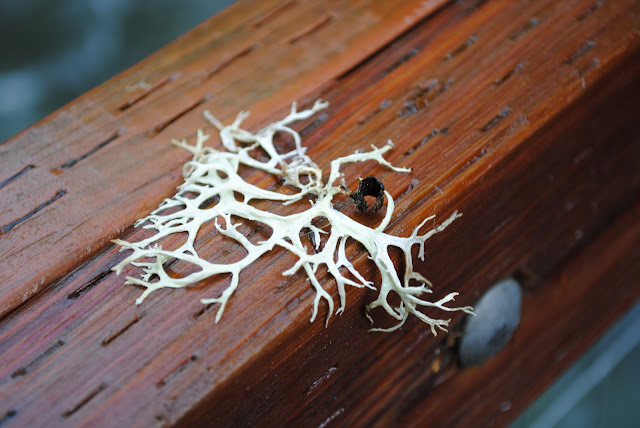 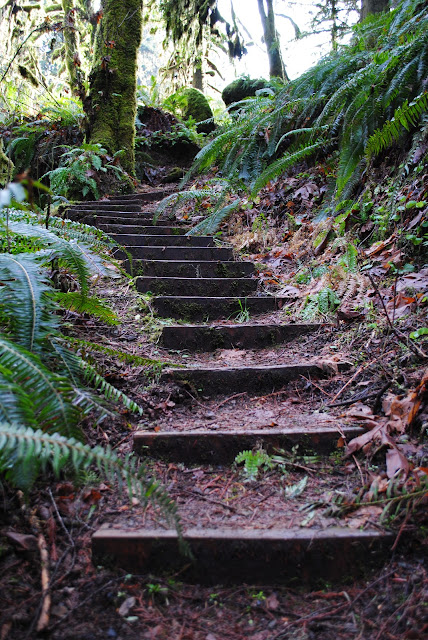 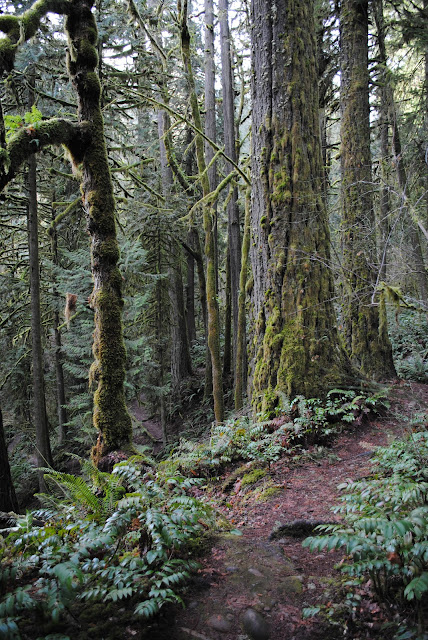 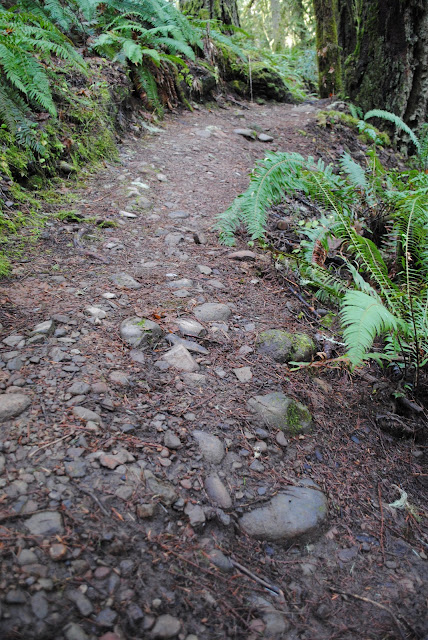 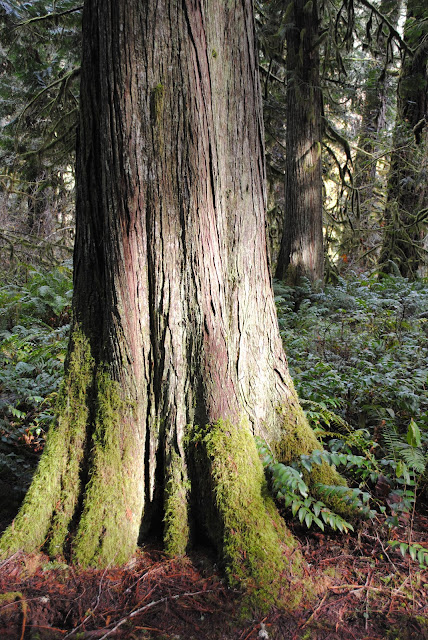 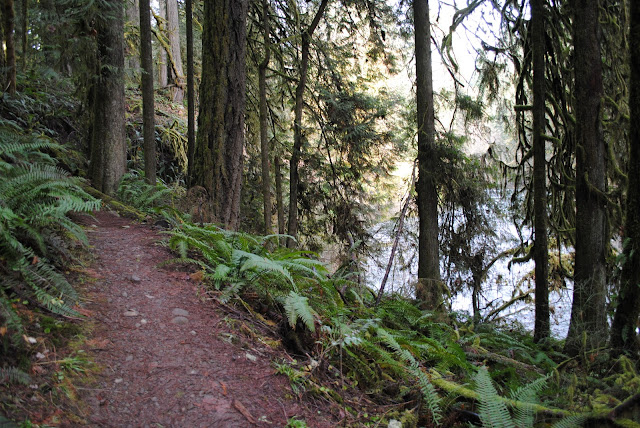 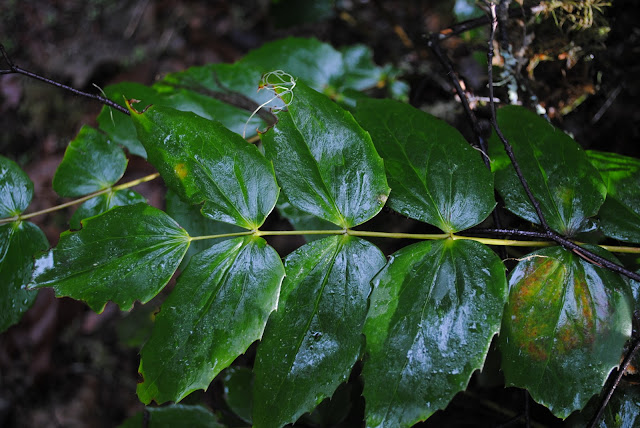 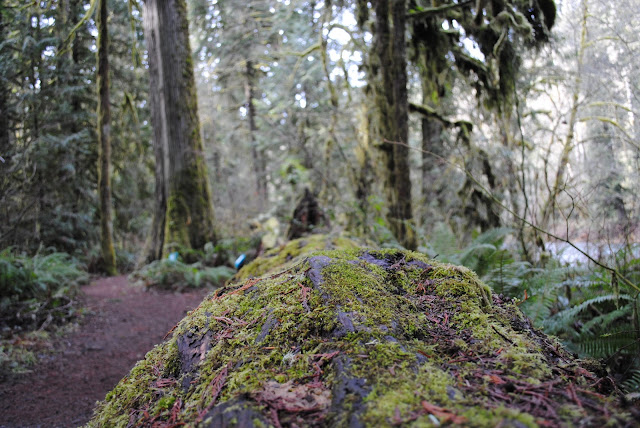 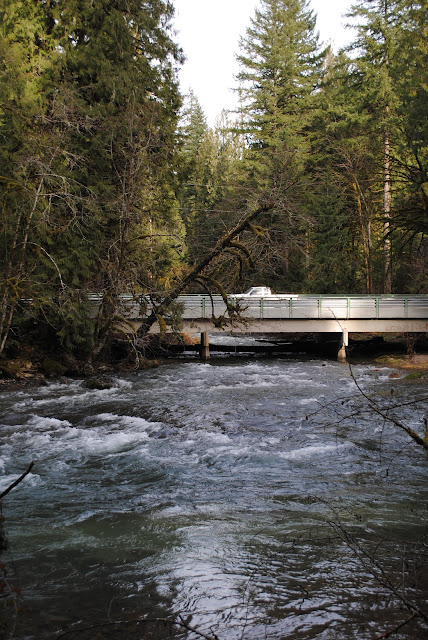 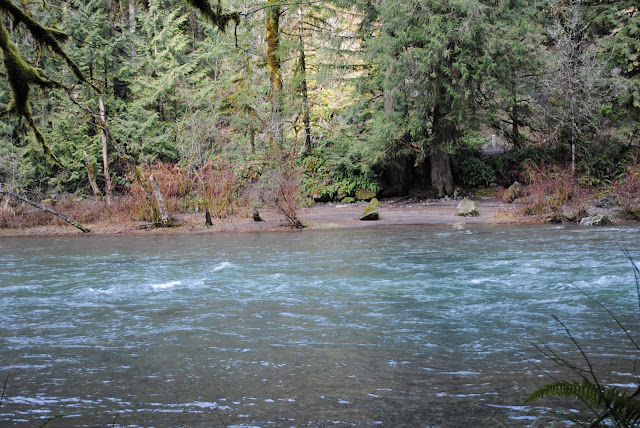 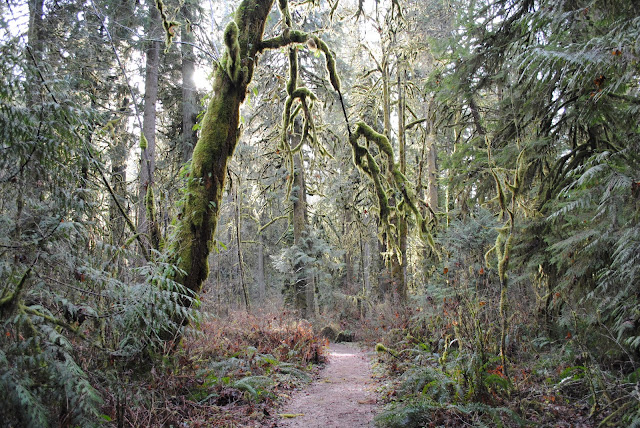 What do you do with a fell old-growth that conveniently happens to be laying right next to the trail? Why not make a bench out of it? (see below). 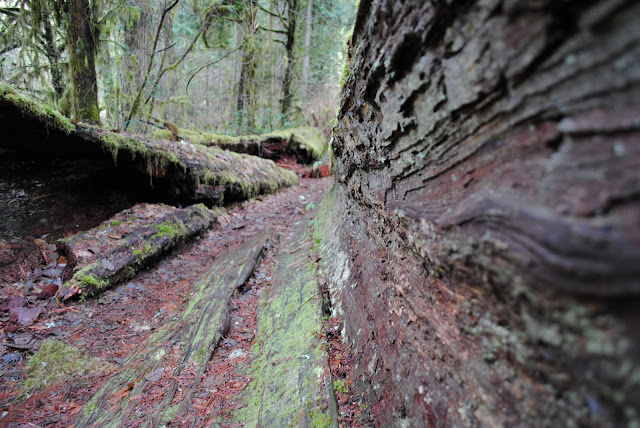 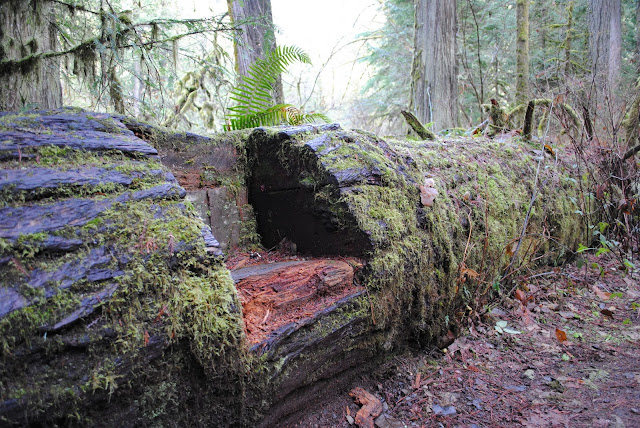 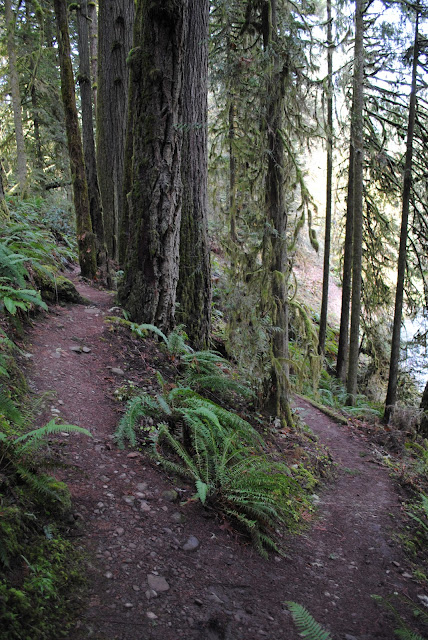 The bridge across the creek connects the main park area with the nature trail loop that is about 1 mile long. The bridge is very wobbly, which adds to the excitement of crossing it. From here you may be able to see spawning fish swim by under the bridge on a winter's day. You also might get a good view of a fisherman catching said fish... 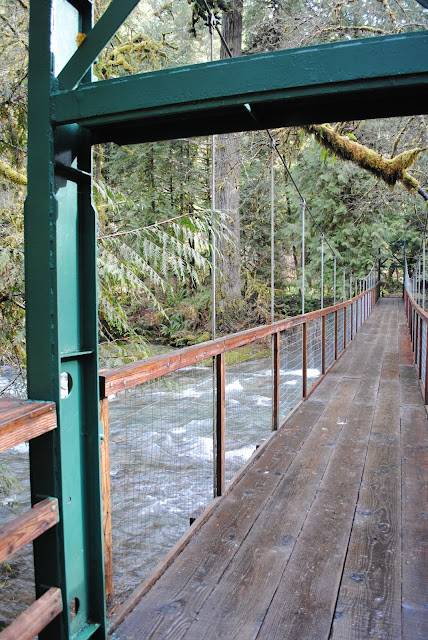 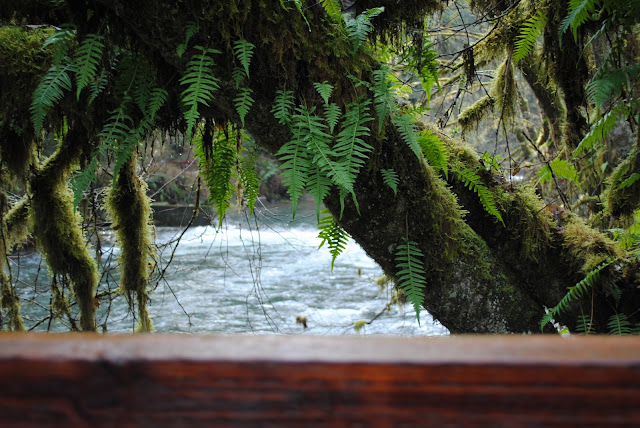 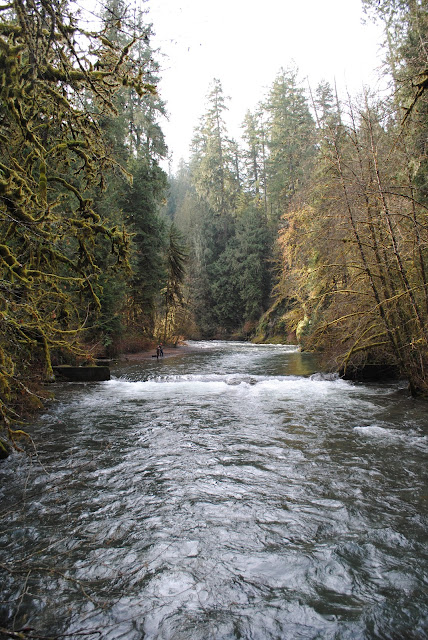 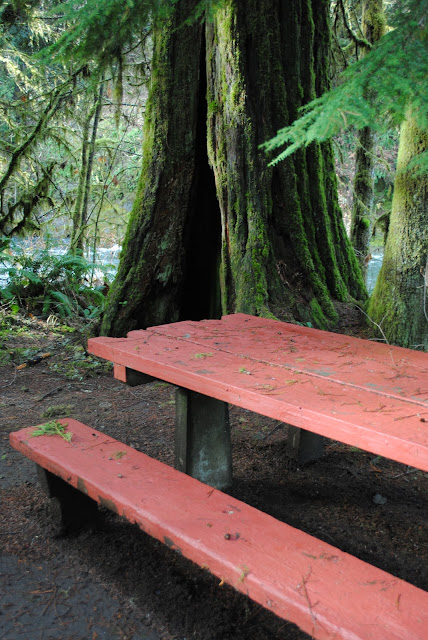 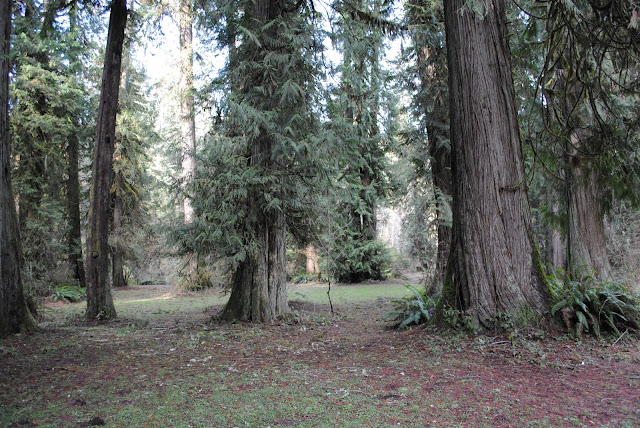 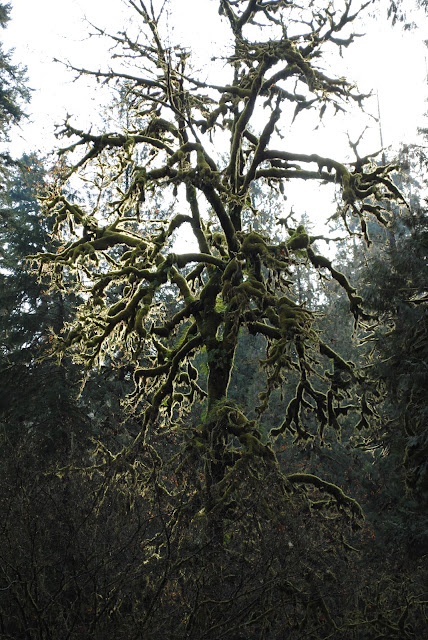 Believe it or not, the photo above has absolutely no photo-shopping or enhancement whatsoever. The way the sun was hitting the tree illuminated the moss, making the tree look surreal, like some sort of shining tree-of-life. At the base of the tree I expected to find a pot of gold or some sort of sparkling pool of water, a drink from which would make me immortal. Alas, I found no such thing.

After tromping through the park for about 2 hours, I decided to attempt to locate Fearless Brewing Co. in downtown Estacada. Previously, after my trip to Silver Falls State Park (see a previous blog entry on Silver Falls S.P.) I discovered the Fearless Brewing Co's Scottish Ale, which is to this day one of the very best beers I've ever had in my life, and which also just so happens to be made in Estacada. Upon finding the brewery at the end of downtown Estacada, I saw an A-frame sign out front advertising that two of Fearless's own homemade brews (the Porter and the Clackamas Cream Ale) were only $0.75 per pint. That's right, a PINT of fresh microbrew for under $1. They also featured a catfish sandwich on the menu! It is not too common to find catfish on menus this far away from the Mississippi River, and the sandwich was outstanding. I even helped myself to a basic cheeseburger because I was hungry and both sandwiches were almost fast-food cheap, and the burger, though not quite as heavenly as the one I had in Silverton at Mac's Place, was almost as good. I had one pint each of the Cream Ale and the Porter. Both, although not quite as good as the Scottish Ale, were excellent beers. Fearless will most definitely become my go-to place whenever I come out to the Clackamas River area for hikes. 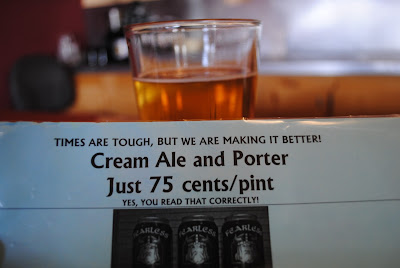 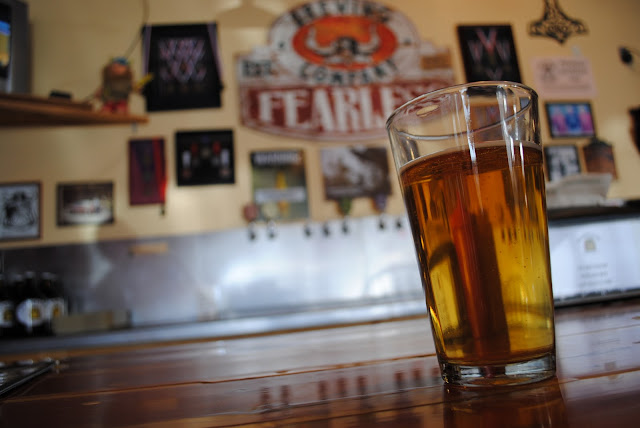 I was hoping to finish the day with about 8 moderately physical miles under my belt, but instead it was more like a delicate 2 miles. Let's just say that I consumed about two-to-three times as many calories after the hike then I burned during the hike. But the nearer we come to Spring, the sooner days like these are going to come to an end.

Three things in closing:
1) Eagle Fern Park is a wonderful place to relax or take children, but not a place you go if you're looking to burn some calories.
2) Fearless Brewery, though lost in the shadows of larger Portland brewers like Bridgeport, Hopworks, and Widmer, makes really good beer and serves outstanding food, all at very affordable prices.
3) I am dying to get away from the easy hikes/parks and out in the wilderness to start tackling the meatier ones. I am hungry for an adventure and am really looking forward to Spring, when warmer, safer conditions will allow me to get deeper into woodlands and up on top of mountains. Each week I am watching the weather like a hawk. As soon as I get a chance to get out there on a strenuous trail, I'm going to jump all over it. Until then, don't mind my blog entries of the some of the least-intense natural areas in and around Portland, Oregon.

Posted by The Black Watch Sasquatch at 3:59 PM