My first hiking experience back when I first moved to Oregon in 2008 was right here, in Forest Park. I walked from my apartment on the corner of 23rd Ave and Hoyt over to a trailhead under a bridge off Thurman, passing Firefly, one of my favorite coffeehouses, along the way. I hiked up Balch Creek and was captivated by how such a wonderful "fairy-tale-like" place could literally sit at the edge of a city the way Forest Park does with Portland.

For those of you who have never been to Portland, you would hardly believe that such a park exists so close to downtown, the most urban area of the city. Forest Park is only 3 miles from Pioneer Square, in the center of downtown Portland. It is as if one moment you can sip a cup of coffee at Powell's Book, located on one of the busiest corners of Portland, where downtown meets the Pearl District- and the next moment you can be walking along a section of the 30 mile long Wildwood Trail. And you wouldn't even have to get into your car to do it! This is one of the hundreds of reasons why I think Portland, Oregon is the greatest city in the country. And best yet, one of the cities greatest neighborhoods, the Northwest district (aka Nob Hill), the neighborhood that butts up against the park, is full of excellent restaurants, coffee shops and tea houses, pubs, and eclectic shops, many of which operate out of old Victorian homes.

A quick factual snapshot of Forest Park, just so that you can get an idea of how big it is:

Forest Park:
occupies 5,171 acres
stretches for 8 miles along the Willamette River
includes over 70 miles of hiking trails, one of which, the Wildwood Trail, is 30 miles long.
contains 112 different species of bird and 62 species of mammal
has a creek (Balch: see below) with a resident trout population

The Hike:
In this blog, I hope to cover all 30 miles of Wildwood Trail. In fact, living as close as I do to this park, ideally I would like to hike all 70 miles worth of hikes contained inside the park. However, for now, I present to you the old hike that I used to do just about twice a month back in 2008, when I first moved to Portland.

The hike posted below starts at the parking lot of Pittock Mansion, follows Wildwood Trail down across Cornell Rd. to Lower McLeay Trail/Balch Creek Trail, then rejoins the Wildwood Trail at the stone ruins of the 1930's rest area, and stops at Wildwood's junction with Birch Trail. All in all the hike rang in at about 7.3 miles.

NOTE:
When you view the photos below, keep in mind that every one of them was taken within a 5 mile radius of downtown Portland!! We're not talking the outskirts of the greater Portland Metropolitan area here, we're talking 5 miles from downtown!!


First up, the beginning of my hike: Pittock Mansion, perched high above Portland like a castle!

Pittock Mansion (see above) was built in 1909 by Henry Pittock, the publisher for The Oregonian newspaper. Consider it a Pacific Northwestern Zanadu, albeit quite a bit smaller than anything the fictional Citizen Kane or real-life William Randolph Hearst occupied. It sits high above the city, with a commanding panoramic view of not only the skyline below, but of essentially the entire city of Portland (including the industrial wastelands along the river outside St. Johns), as well as Mt. Hood and Mt. St. Helens (and even on a clear enough day, the top of Mt. Rainier). According to Wikipedia, Pittock Mansion is a "chateau" in the French-Renaissance style. In 1974 it was added to the national registry of historic places. It is a really neat place to relax or have a picnic at. I could just sit up here for hours looking out over the city.

The photo below is of a lone precocious rose that blossomed early this year next to a park bench in the back yard of the mansion. The lone rose overlooks the City of Roses down below. 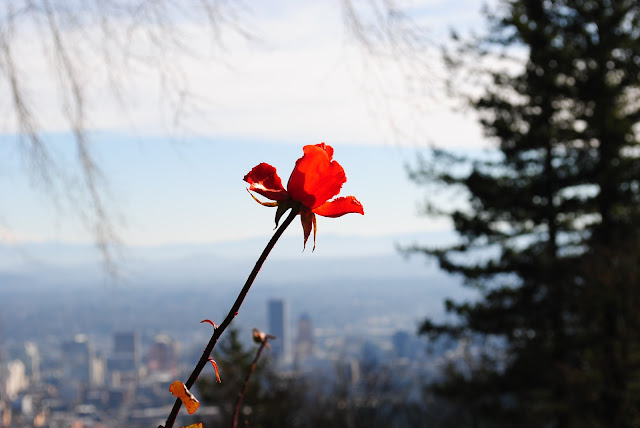 After taking in the views from Pittock Mansion, I began my descent down to Cornell Rd and the start of the Lower McLeay / Balch Creek Trail.

After you cross Cornell Rd. (and take caution doing so, the scenery and curves of this road bring out weekend road warriors with their Ducatis or Porsches) you will drop a little further down into a cold, damp trail that follows a babbling creek. This is Lower McLeay Trail, and the creek you're following is Balch Creek, named, coincidentally, for a man who was hanged for the murdering of a man who ran off with his young daughter. Balch used to live along this creek, hence naming it after him. Below are photos taken from along Balch Creek and Lower McLeay Trail.

Don't get too romantic: the stone ruins you see above are from an old rest-stop / restroom area built in the 1930s. Yes, it would be much more mysterious and fanciful if these were the remains of something more "Hansel and Gretel", but alas, it is a large, old stone outhouse. But man, it's a beautiful sight to see along this trail, oddly enough. And it is fun to climb the mossy stairs to the second floor. People litter quite a bit around this area however, which is very unfortunate. And I think it is even safe to say that during the summer the occasional homeless person actually uses this as shelter some nights.

Right at the stone ruins, you can either continue along Lower McLeay Trail, which will dump you out at a bridge (Thurman Street), or you can do what I did: continue along Wildwood Trail. The trail does something very interesting right at this point. The Lower McLeay trail is very damp and cool trail through a dark, wet ravine. However, once you start climbing up and out of the ravine on Wildwood, the sun slowly starts to shine more and more, the trail becomes much drier and warmer, and it feels as though you are on a totally different trail. Whereas Lower McLeay Trail snakes through old growth forest, with massive fell trees and the tallest tree in any city in the country (a Douglas Fir roughly 240 feet high).

Once you start back upon Wildwood trail, however, you quickly escape this damp, dark old-growth and emerge instead into a drier, second-growth forest. Part of me always wants to turn around at this point and just walk up and down balch Creek. It is just so beautiful. But at the same time, it attracts a lot of people, and on weekends in can get crowded with people walking their dogs, trail-runners, and families who can be very slow walkers.

But enough about that, below are glances at Wildwood Trail from Lower McLeay and the stone ruins to Birch Trail.


I love this park, and I cannot believe that it is this close to urban living. It boggles my mind, truthfully. I will come back to this park over and over, not just to blog about all 70 miles, but because this place is very nostalgic to me. Forest Park is one of the first wildernesses I walked into as a newly implanted Pacific Northwesterner back in 2008. This place will live in my heart as a place where, in many ways, I found myself years ago.

Posted by The Black Watch Sasquatch at 7:26 PM