Having felt really good last weekend after hiking up to Angel's Rest, which was a little under 5 miles round trip and a climb of about 1,500 ft., I decided to push myself a little harder this weekend. I looked through my guidebooks for a hike that was roughly 6-8 miles round trip with an elevation gain of over 2,000 ft. My eye caught Hamilton Mountain in the Columbia Gorge at Beacon Rock State Park: over 6 miles round trip with a 2,000 ft gain in elevation. That'll work. 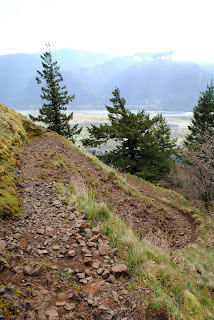 A walk down a flat, dirt path in a state park is considered a hike, but a hike is something much greater. A hike is an adventure. A hike is something that takes great effort to achieve. Most, if not all, of the hikes that I have covered in this blog up to this point have been just that: hikes. Winter is not a time to attempt serious hikes for numerous safety reasons. But Hamilton Mountain is the first hike that I have covered in this blog. You actually have to be in relatively good physical shape to do it; and it actually feels like an adventure rather than a mere pleasurable walk in the woods. A hike should have an element of danger to it (if not a liberal dose of danger), it should make you exhausted by the end of the day, it should intimidate you mentally and push you physically, it should be a journey grand enough that your friends and family beg you to at least tell someone where you're going in case you get lost or injured.

So what makes Hamilton Mountain a hike? Three things.


1. It will intimidate you mentally:


3. It is a steep hike and will definitely push you physically:

I did a separate blog entry on both of these hikes. Click on either of the links below to view those previous entries from Beacon Rock State Park.

Alright, let's talk about the hike. 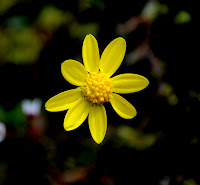 The trailhead is very readily accessible, located just up the hill via a campground road from the main Beacon Rock parking area. There is adequate parking, restrooms, water, a playground, and a rather scenic picnicking shelter. There are also a few massive fell old-growth trees within this park-like trailhead area, one of which nearly comes up to my shoulders on its side, the other marking the start of the Hamilton Mountain trail.

The first leg of the hike connects the trailhead with Rodney Falls. From the trailhead, you will primarily walk through a beautiful forest with moderate elevation gain. This is also where you'll find a beautiful and diverse array of flora. At one point early on you will emerge from the shaded forest into a sunny, wide-open slope that was cleared to make room for power lines, which you'll notice directly above you. The power lines aren't very sightly, but at least this clearing gives you a glimpse of Hamilton Mountain itself high off in the distance. "I'm going to climb to the top of that!?!?!" you might say. But do not worry too much, you do not have to be an avid hiker or athlete to make it to the top, but you will need a little will and persistence at the very least. If you're totally out of shape, you might need a little more.

After the power lines you'll again enter the forest with just a short distance remaining before Rodney Falls. Before you get to Rodney Falls, you will actually come across Hardy Falls (easier to hear than see), with a muddy side trail leading to a view point. Don't expect much from the viewpoint- Rodney Falls is much more exciting, as well as a mere a hop, skip, and jump ahead of you. Rodney Falls, while far from the most impressive waterfall in the Columbia Gorge, is very beautiful. The rustic bridge at the foot of the falls only adds to the aesthetics. For a truly unique, if not intimidating, experience, climb up to the ledge and peer over the railing into the Pool of Winds. What is Pool of WInds? Basically, the first half of the falls dumps into this big rocky teacup with a notch cut into it, and the second half of the falls thunderously gushes out of said notch. It has that sort of "wrathful side of mother nature" appeal to it.

Here are some photos of the first leg of the hike, from the trailhead to Rodney Falls.

The second leg of the hike begins at the far side of the bridge over Hardy Creek at the foot of Rodney Falls and ends at a gnarly lookout over the Columbia River.

The area around Rodney Falls, unsurprisingly, can get very muddy. The stairs leading up from the falls to Hamilton Mountain are no exception.

Shortly after climbing the stairs and wandering through some more beautiful forest, you'll come to a fork in the road and a sign that gives you two options: Difficult and More Difficult (see above) Take the more difficult path to the left. It is way more scenic. At this point you'll notice the hike get steeper, your layers coming off one by one, your lungs working hard, and your legs working harder. You're about to get a work out, yes, but don't worry, you're not about to climb Mt. Everest or anything. It isn't that bad.


After climbing steep switchbacks you'll emerge out into the open at what I think is the highlight of the whole hike (yes, even more so than the summit itself)- a large rocky "thumb" poking out into the gorge. The views from here are great and the "thumb" itself has a few short paths on it that lead to even better views. There is a huge, jagged crevasse with vertical drops here, so use extra caution and do not get too close to the edge. There is already one little gravestone placed upon these rocks here, and a fall in this area would be very bad. Enjoy the views but use caution.

Here are some photos of the second leg of the hike, from Rodney Falls to the rocky "thumb."

The third and final leg takes you from what I have dubbed "the rocky thumb" to Hamilton Mtn's summit 2,438 ft above the Columbia River.A short ways after the rocky thumb you will find yourself out in the wide-open switching-back steeply with a wonderful view of Beacon Rock off in the distance (from here it looks tiny... really makes you realize just how high up you are). Use caution in this area too- there is a straight-drop off a cliff in this switchback area and the ground upon which you walk is gravely and can be slippery. This wide-open space with the switchbacks is one of my favorite parts of the hike.

After leaving the wide-open space and re-entering the shady forest, you'll be glad to know that you're nearly there. The remaining climb is steep (see below) but there isn't much climb left. 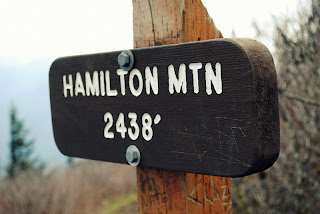 The view from Hamilton Mountain's summit is grand. On a clear day you'll see Mt. Adams looming out in the distance, Bonneville Dam and Cascade Locks far down below, and the much taller Table Mountain just a "stone's throw" to the east. After climbing Hamilton Mountain  -standing at the summit, huffing and puffing and tired- it is hard to fathom climbing Table Mountain, which doesn't exactly dwarf Hamilton but is, imposingly, much taller.

After having hiked to Angel's Rest last weekend, I came to the conclusion that Hamilton Mountain's summit has a great view, but that's about it. Do not climb up here expecting Angel's Rest: boulders to climb on, a variety of places to pop a squat and have a picnic, hell, even room to lay a blanket down without getting in other people's way. 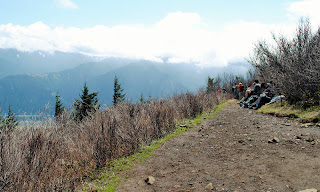 The summit area itself is very small and narrow- sort of like a T-intersection that is surrounded on all sides by thick brush. The area in which to take a load off is really no wider than a hiking trail, so be respectful when you're up here- share this area with the others who've made the trek. Have a snack, take a few liberal swigs from your water bottle, savor the view for a while, and then try to convince your tired, wobbly legs that it's time to head back down.

Here are some photos of the third leg of the hike, from  "the rocky thumb" to the 2,438 ft summit.

Needless to say, after hiking Hamilton Mountain I was exhausted. I wanted a burger and an IPA like it was nobody's business. I remembered passing by a restaurant called the Pacific Crest Trail Pub in Cascade Locks, so I made that my next destination shortly after returning to my automobile..

Ok, ok. I'm not going to lie. Hamilton Mountain has been my most strenuous hike since starting this blog. I wanted to chill afterwards. I drove home, showered, changed, and quickly ended up at one of my favorite cigar bars in Portland: McMenamin's Greater Trumps.  Next door to the legendary Bagdad Theater in the Hawthorne District, Greater Trumps is what you would probably call a "hole in the wall" (because that is essentially what it is) but it is a philosophical, literary, aficionado, jazzy, port-wine-or-fine-whisky-lover's-den if there ever was one in Portland. I frankly love it here. An hour at Greater Trumps, with a Perdomo and a glass of homemade I.P.A., served as a most relaxing end to a tiring day.

McMenamins Greater Trumps, a Perdomo Lot 23 torpedo, A History of the World in 10 1/2 Chapters by Julian Barnes, and a cold glass of McMenamins own I.P.A.:

Posted by The Black Watch Sasquatch at 9:39 PM